This concert is a homage to the violinist, music educator and the father of maestro Gilbert Varga, Tibor Varga, born 100 years ago.

He was born in Győr on 4 July 1921 and passed away in Grimisuat on 4 September 2003. Tibor Varga was a violinist, a conductor and a music educator of international renown. He entered the world of music at the age of six, and he played Mendelssohn's Violin Concerto as early as the age of ten. It was Jenő Hubay who recognised the young violinist's great gift, and Varga was admitted to the Liszt Academy in the same year. Besides Hubay himself, he also had Carl Flesch as his professor. He graduated from the Liszt Academy in 1938 and went on to read philosophy at the Pázmány Péter University. He would regularly go on tours abroad already as a music student, and in 1947, he emigrated to London and taught in Detmold from 1949. In 1956, he moved to Sion, Switzerland. Tibor Varga was the honorary citizen of several French and Swiss towns and received numerous prestigious honours decorations in Germany, France, Hungary and Switzerland. 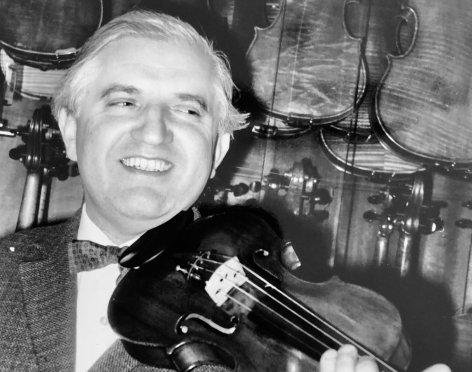 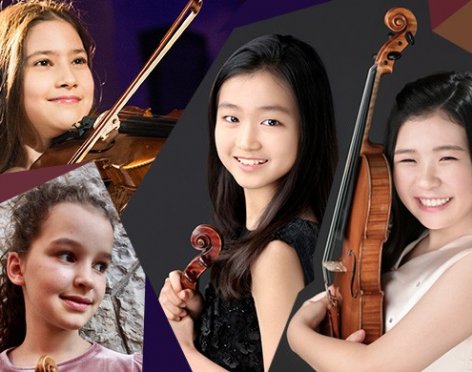 This concert features young violinists, hardly older than ten themselves, genuine child prodigies, who are at the outset of their careers yet carry the century-long tradition of the Hungarian Violin School in their music. Tibor Varga always placed great emphasis on the search for high-level training and the unfolding of the talent of young gifted musicians. Also, his son, Gilbert Varga, followed in his footsteps when he invited the world's child prodigies to participate in the memorial concert organized in homage to his father. Finally, our very young violinists are coming to Pécs and Budapest, who all have a command of an adult's repertoire. They are all young artists who will undoubtedly be in the vanguard of the greatest violinists of the 21st century.

They are young artists who will certainly be among the leading violinists of the 21st century. Two South Korean violinists, one of whom lives in the US, a Swiss and a Hungarian violinist living in Vienna, are uniting here for this concert. All of them burst into the universe of music like meteors and have proved themselves at various high-ranking music competitions ever since.  The colourful and rich programme consists of their repertoires. Each soloist takes to the stage and introduces themselves to the orchestra and the Pécs-based audience with an orchestra piece or a concerto movement. We can admire only one soloist at most concerts and mostly in just one part of the night. Those who enjoy listening to the music performed by various personalities and young virtuosos should definitely attend this event since they will be in the limelight all evening. The National Culture Fund of Hungary funds the production.

Similarly to the Adagio in E major (K. 261), the Rondo in C major was written for the solo violinist of the Prince-Archbishop of Salzburg, Antonio Brunetti. The archbishop, originally from Italy, had brought his ensemble to Vienna in 1781 for a longer period, so that he could prove to the creme de la creme of the capital what high-quality ensemble he owned with Leopold Mozart as conductor, Wolfgang Amadeus as concertmaster and Brunetti as soloist. This piece had been specially composed for this occasion so that Brunetti could shine with a new work. They garnered great success; still, this trip turned out to be fatal for the Prince-Archbishop: after having been denied the Prince-Archbishop's approval to give solo concerts in Vienna, Wolfgang Amadeus (1756-1791) resigned his job in Salzburg, to the great outrage of the Archbishop and Leopold Mozart, and began a life in Vienna as a "freelancing" musician.  Music history would have been quite different if Mozart had returned to Salzburg alongside the ensemble. Although the Rondo in C major shows no trace of this row, it is a decisive piece whose premiere was linked to a crucial turn in Mozart's life.

The Golden Cockerel was Nikolai Andreyevich Rimsky-Korsakov's final three-act opera. The work stages the helplessness of the military leaders, the aristocracy and the political elite, so its premiere in Russia didn't come into question for a long time. Even later, it was mainly performed in abridged and re-arranged versions. Following World War II, however, it turned out to be enormously successful. In fact, it was Rimsky-Korsakov's only opera that was also staged in Hungary. Efrem Zimbalist transcribed the work full of musical colours and plenty of humour as a concert fantasy for violin, which doesn't only render the popular ear-worms of the opera but also the virtuoso technique of the violin performance.

Another opera is evoked on the stage, but this time, only a single excerpt from it. Initially, it was meant to be an orchestral interlude, which we can hear with the violin solo transcribed by Fritz Kreisler. Manuel de Falla's (1876-1946) opera La Vida breve is set in the Granada of the 19th century, where the double life of the protagonist causes the central conflict: while he is carrying on with a poor girl, he marries a wealthy lady, but the glamorous wedding, of course, cannot remain hidden. Dance is an inherent part of all weddings, so Falla couldn't possibly avoid enriching the opera with a few characteristic dances. This time, we can hear Spanish Dance No. 1.

Ludwig van Beethoven (1770-1827) composed his Romance in F major while still quite young, in 1798, which was finally published, however, only after his Romance in G major, in 1805, so it is known as the master's second violin romance. Still, in fact, it is the earlier one. What's more, some musicologists presume that Beethoven meant to complete his unfinished violin concerto started in Bonn with a slow movement, but then, in the end, he never completed it. This lyrical movement written in rondo form reminds us in many respects of Haydn and Mozart; still, its intimate and expressive tone also forecasts Beethoven's later slow movements.

Originally, Franz Waxman (1906-1967) wrote this Fantasie for violin and piano in 1946 based on the motifs of Bizet’s Carmen as the soundtrack for the movie Humoresque. Still, it turned out to be such a greatly successful virtuoso violin piece in itself that he expanded it the very same year and transformed it into an independent work. It is still on the repertoires of several leading violinists worldwide, as it is a genuine blockbuster. The particularly spectacular piece soon received various orchestra accompaniments and was staged with more than one solo instrument, such as the trumpet or the viola. The opera wasn't only the source of Bizet's success, but it nourished two violin fantasies as well: independently of Waxman's piece, Pablo des Sarasate also composed one based on Carmen’s melodies.

The young Mozart proved to be just as remarkable as a violinist as a keyboard soloist. His piano concertos accompany his entire career. In fact, he composed one even in the last spring of his life. Of violin concertos that can be considered authentic, however, he composed only five, all of them in 1775. The first one of them, written in B-flat major, is performed today. Mozart supplied it with two different final movements on the intention of the above-mentioned Antonio Brunetti. This concerto shows Mozart's most rule-abiding face: all three movements are in sonata form and adhere to all established traditions of the time as far as the genre of concertos is concerned. Still, its melodiousness, youthful dynamism, creative phrases, intimate slow movement and triumphant finale leave us without a shadow of a doubt of Mozart's genius. The work is certainly superior to the violin concertos of minor masters of the period.

Camille Saint-Saëns: Violin Concerto No 3. in B minor - 1st movement

Camille Saint-Saëns’ (1835-1921) Violin Concerto No 3. debuted with the young Pablo de Sarasate's solo in Hamburg in 1880. In connection with this piece, the composer received the criticism that it was less virtuoso and spectacular than the previous two violin concertos. Yet, as far as interpretation, expressivity and poetry are concerned, it is much more challenging for the soloist, so it is by no means inferior two the other two. It is especially true when it is performed by an extraordinarily young soloist, just as at its world premiere.

Fritz Kreisler (1875-1962) began his long career as a child prodigy himself in Vienna: at the age of seven, he was already a student at the local music academy, but he soon went on to study at the Conservatoire in Paris. The complete career of this virtuoso violinist left space for compositions and transcriptions as well, and he had a great knack for imitating the style of various well-known composers. Even though grand classical genres (like violin concertos) held no appeal for him, some of his salon pieces are still immensely popular. One of these is Liebesleid (Love's Sorrow), written early, in his years in Vienna, which evokes the pleasant bourgeois world of the Austro-Hungarian Empire. Several transcriptions have been written from it, but Rachmaninov's piano transcription is perhaps the best-known of all of them.

In Tambourin Chinois, Kreisler captures the impressions of a distant culture and clothes it into a somewhat European gown. The work is framed by a rhythmically strict part built on an ostinato, and in between, we can hear a section spotted with Eastern harmonies. It is a rather awkward idea that a violin is meant to imitate a tambourine (a small drum), and it is even more surprising that the violin can actually live up to this expectation.

Ernest Chausson's (1855-1899) oeuvre is little-known in Hungary, but he bequeathed many lovable and emotional pieces on us. His Poème Op. 25 for violin and orchestra is a long-winded, grim toned work strained with dramatic moments, where the soloist and the orchestra find a tone with each other only little by little, and in the first moments, they "speak" more beside than with each other. After an anthem-like reunion, the work concludes with an ethereally peaceful ending.