Gilbert Varga, son of celebrated Hungarian violinist Tibor Varga, conducts with distinctive presence and flair. A commanding and authoritative figure on the podium, Varga is repeatedly acclaimed for performances displaying a broad range of colours, exquisite textures, and subtle use of dynamics. Renowned for his elegant and exceptionally clear baton technique, Varga has held positions with and guestconducted many of the major orchestras across the world.

Varga has conducted many of the major orchestras across the globe, including the Philadelphia Orchestra, DSO Berlin, Radio Symphony Berlin, Orchestre de Paris, Oslo Philharmonic, Sydney Symphony and in the the 2016/17 season he debuted with the Cincinnati Symphony as well as return engagements with the Royal Liverpool Philharmonic and the Macao Orchestra. Varga was the Principal Conductor of the Taipei Symphony Orchestra from May 2013 till the end of 2018. Varga has been appointed Chief Conductor of the Pannon Philharmonic from 1 January 2019, sharing the position with Tibor Bogányi.
Gilbert Varga studied under three very different and distinctive maestros: Franco Ferrara, Sergiu Celibidache and Charles Bruck. In the earlier part of his conducting career Varga concentrated on work with chamber orchestras, particularly the Tibor Varga Chamber Orchestra, before rapidly developing a reputation as a symphonic conductor. He was Chief Conductor of the Hofer Symphoniker (1980-1985), and Chief Conductor of the Philharmonia Hungarica in Marl (1985-1990), conducting their debut tour to Hungary with Yehudi Menuhin. He was also Permanent Guest Conductor of the Stuttgart Chamber Orchestra (1991-1995) and Principal Guest of the Malmö Symphony (1997-2000). In 1997 Varga became Music Director of the Basque National Symphony Orchestra, leading them through ten seasons, including tours across the UK, Germany, Spain and South America. 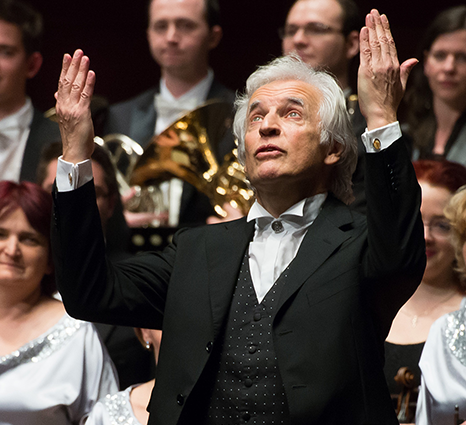 Varga’s discography includes recordings with various labels including ASV, Koch International and Claves Records. His latest recording, released in January 2011, of concertos by Ravel and Prokofiev with Deutsches Symphonie-Orchester Berlin and Anna Vinnitskaya on Naïve Records was given five stars by BBC Music Magazine.