If we search for the composer of the ideal music, Haydn, Bartók or Schubert can easily come to our mind. This night will provide us with the chance to experience the encounter of these composers with their ideal. First, the young Haydn, the conductor from Esterháza, will delight us with his Symphony No. 10 written in an optimistic, spring-like tone. Bartók –a young man hopelessly in love – composed a violin concerto for the lady of his dream, but his love remained unrequited and the composition remained unpresented in Bartók’s lifetime. Schubert’s Symphony No. 5 will be performed as the concluding piece of the night, which relates the 19-year-old Schubert’s „encounter” with Mozart. In 1816, Schubert got enchanted by several of Mozart’s compositions, and his former Beethoven craze (which comes to show in his Symphony No. 4) was replaced by his infatuation with Mozart’s music for a year. This work pays tribute to this passion. Though indirectly through Schubert, Mozart is also evoked among the ideal composers. Spend an ideal night full of beautiful music with us!

The Baroque era applied the term "sinfonia" as a by-name for orchestral opening movements; basically, as a synonym for overture. The first attempts to create the actual genre "symphony" took place in the early 1750s, for instance, in Carl Philippe Emanuel Bach's composition workshop. These pieces are still grandiose overtures, consisting of three parts (fast-slow-fast) instead of two (slow and fast). With this feeble legacy behind him, Joseph Haydn (1732-1809) developed his symphonic workshop, which then served as a role model for future composers. The four-movement symphony is essentially Haydn's invention. Still, we cannot ignore that non-German-speaking masters would typically stick to the three-movement (without the minuet) version. Haydn's true innovation period began in 1761 when he entered the service of the Esterházys. The relative isolation and the permanent and high-quality ensemble he could work with represented a genuinely inspiring environment to him. The numbering of the Hoboken catalogue reflects only a rough chronology, so even though there are symphonies written already in the Esterházy' court that are marked with lower numbers, this work was certainly penned in an early phase in Haydn's career, when he was the Kapellmeister of Count Morzin's ensemble in Vienna.  Therefore, this symphony is one of the earliest Haydn-symphonies, a kind of cornerstone that stands for the origo for more than a hundred later symphonies. Upon hearing this brief, three-movement piece, we can easily spot Haydn's characteristic style, orchestration, musical proportionality and flexibility in this composition. Although in its length, apparatus and love for experiments, it is a much more modest composition than, for instance, his London symphonies, but in musical quality, it does by no means lag behind its later counterparts.

Béla Bartók’s (1881-1945) Violin Concerto No. 2 used to be regarded by musicologist as the composer's only violin concerto right until 1956, when the violinist Stefi Geyer, Bartók's youth love interest, passed away. As a token of his love, Bartók dedicated a violin concerto to her: a music portrait. Both Bartók's love and his musical gesture remained unrequited on Stefi Geyer's part, so she would never perform it or, indeed, show it to anybody.  (Note that also Bartók kept silent about this work all his life and would allude to his Violin Concerto No. 2 as his only one, without adding any numbering.) After Stefi Geyer's death, however, it reappeared from her legacy, and Sacher Paul, the head of the Basel Chamber Orchestra, who is known for commissioning and presenting several significant compositions of the 20th century, took steps to get hold of it, and the piece premiered under his baton in 1958.

The piece is no violin concerto in the conventional sense of the word, much rather an analytical portrait: its two movements represent the two faces of Stefi Geyer. In the first, we can see her in somewhat romantic, idealised colours, clothed in slow, reserved music. In the second, the virtuoso and spectacular violin solo showcases a buoyant, sociable, charming Stefi. Bartók later used the first movement of the work in his Two Portraits, where the two portraits are referred to as "One Ideal" and "One Grotesque". It is the former that is based on the concerto, confirming our suspicion that the music was to allude to the ideal beloved. The master even highlighted an element, on which he commented, "It is your 'leitmotif'", which prevails mainly in the first movement but is also present in the second, only with a completely different shape and character. Whether Bartók's "painting" was a true reflection of Stefi Geyer's personality, we will never know. Neither will we ever know how these portrait images would have been completed if Stefi had returned Bartók's feelings, but he undoubtedly drew a picture of how he saw the "ideal" love of his youth.

The 19-year old Franz Schubert (1797-1828) was burning with a genuine fever for Mozart in 1816. Previously, he had been primarily enchanted by Beethoven, who did not only had an imperative authority on the Vienna of his day but was also considered a lone wolf and a grumpy composer. Schubert's Symphony No. 4 “Tragic” was rooted in his aversion and then subsequent admiration for Beethoven. In several aspects, the “Tragic” Symphony rhymes with Beethoven’s Symphony No. 5 “Of Destiny”, which premiered around the same time. In 1816, however, a new star appeared on Schubert's sky when he became more familiar with the music of Mozart, then dead for 25 years. Schubert wrote about Mozart with poignant admiration and sorrowfully posed the question of what miraculous things he would have created if not only 35 years had been allotted to him to live. An even bitterer irony of music history is that Schubert was allotted even less, as he was only 31 when he died and never had the chance to experience such acclaim as the young Mozart had garnered in his lifetime. Symphony No. 5 was completed in the year when Mozart was the object of Schubert's enchantment. Unlike Symphony No. 4 in C minor, this composition is predominantly light-hearted, buoyant, and full of loveable melodies. The assumption clearly arises that it is due to Mozart's influence. Allusions in mood and scoring are without a doubt are linked to Mozart; still, we cannot question the composition's Schubertian nature for a second.  Instead of a period structure, he often uses two-bar sections; the wide range of modulations and the Lied-like features are all characteristics that Mozart uses, but in Schubert's compositions, they have a manifestly different effect. In the framework of the fresh first and fourth movements, we can hear a touching and intimate slow movement and a somewhat cocky minuet. The earworm main theme turns the slow movement into a serenade or Lied-like music, which could be interpreted as a personal declaration completed with Schubert's characteristic gentle bleakness. Certain composers have "red-letter" keys, which are meant to express and underline what really mattered to them. In Liszt's case, it was F-sharp major, for Tchaikovsky, it was B-major, and for Schubert,  C-flat major. Also, in this slow movement of his, we find a section in C-flat major. Seemingly, the minuet continues in this solemn tone. Still, by the time it reaches its midsection, it takes on a somewhat folk music-like character, just like the closing movement, where we can indeed clearly recognise Mozart's dramatic remarks among Schubert's otherwise playful themes. 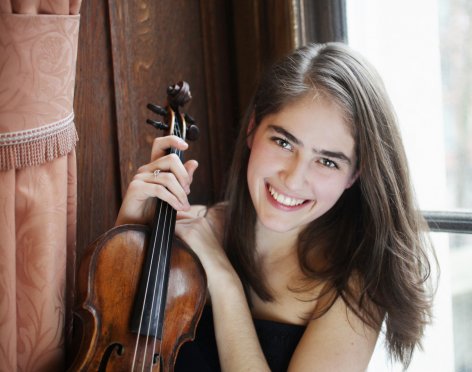 "WE SPENT MOST OF OUR TIME AMONG CHILD AND ADULT MUSICIANS, AND AS WE WATCHED THEM, IT BECAME NATURAL THAT WE ALSO WANTED TO JOIN IN. I STARTED LEARNING TO PLAY THE VIOLIN, BECAUSE I SAW MY SISTER PLAY – WHO I REGARD AS A ROLE MODEL – AND WANTED TO TRY OUT WHAT SHE WAS DOING. MUSIC WAS NEVER IMPOSED ON ME FROM OUTSIDE; IT WAS A FORCE COMING FROM INSIDE FOR BOTH OF US.” (FIDELIO)