From this year onwards, the Hungarian cultural scene will celebrate a new red-letter-day: the Liszt Academy and the National Philharmonic designated 30 May, the birthday of Zoltán Kocsis, the twice Kossuth- and Liszt Prize awarded pianist, conductor and composer, as the Day of Hungarian Classical Music. In its honour, all cultural stakeholders have been invited to place classical music into the limelight with the intention to create a new tradition. In addition to the International Music Day, which has been celebrated for several years, from now, we will also have the opportunity to relish classical, mainly Hungarian classical music, on a specially assigned day. 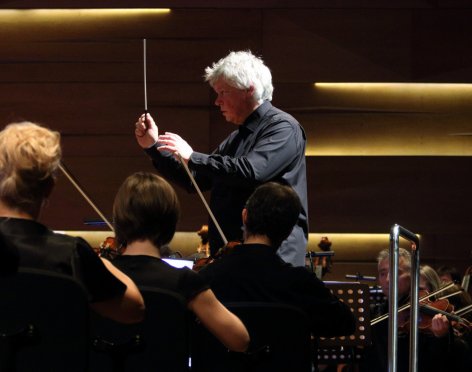 Zoltán Kocsis was the first permanent guest conductor of the Pannon Philharmonic and the holder of the Culture Grand Prize of Pécs. He greatly contributed to and enhanced the professional work of orchestras and music workshops all over the country; thus, without Kocsis’ professional and personal endorsement, Pécs’s cultural and music life and the Pécs-based orchestra itself would not be what it has evolved into thanks the mutually inspiring and persistent efforts. The Pannon Philharmonic was also Kocsis’ regular partner in his musical mission.

In the professional progress - and it is no exaggeration to claim that also in the hearts of the musicians - of the Pannon Philharmonic, Zoltán Kocsis’ person, humanity and the over ten years of jointly performed hard work turned into an unignorable yardstick. From the first day of the orchestra’s renewal until the day he died, he represented a touchstone for the ensemble as an endorsing conductor and artistic adviser. He made his contributions to the Pécs European Capital of Culture 2010 project with profound conviction when he advocated Pécs's candidacy and stood by the city's artistic and cultural values as well as its development plans. In acknowledgement of his accomplishments, he was presented with the Culture Grand Prize of Pécs in March 2016.

Zoltán Kocsis was a devoted supporter of a cultural decentralisation based on a European model, which has been tirelessly carried forward ever since by Zsolt Horváth, the orchestra’s director of five terms.

It is a fundamental principle for the Pannon Philharmonic to commemorate Kocsis's birthday and popularise this new red-letter-day in music. In works featured at the festive concert, we may discover Kocsis’ various personality traits.  The programme is framed by two compositions written by his pivotal role model, Béla Bartók, re-arranged by Zoltán Kocsis himself. In fact, Kocsis' Bartók-interpretation could be considered a genuine benchmark. In the heart of the concert, Ravel’s Piano Concerto in G major will help us evoke the pianist Zoltán Kocsis with the fitting rendering of the Liszt- and Lajtha Prize-winning pianist, József Balog. As a closure, we can relish Bartók's Miraculous Mandarin Suite. The original ballet piece is one of its composer's most controversial, still most popular works.

PLEASE CLICK HERE for the Online Programme for our concert!