"Bogányi is the conductor who gives us the impression to approach music as a discoverer, and as such, he keeps finding thrilling and refreshing motifs in every performed piece. (…) He can show the direction of musical processes and great formal arcs with a self-evident ease." (Kultura.hu, 2017.)

The Hungarian-born conductor, Tibor Bogányi is considered one of the most alluring and most talented members of his generation of Finnish conductors. From the age of 28 - from 2003 to 2006 -., he acted as chief conductor of the Turku Philharmonic Orchestra. From 2008, for six, years, he functioned as the musical director and chief conductor of the Lappeenranta City Orchestra. The orchestra of the famous national Lappeenranta singing competition was also conducted by him in 2010.

This young conductor has worked with all major Finnish orchestras, including the Helsinki Philharmonic, the Finnish Radio Orchestra, the Tampere Philharmonic and the Lahti Symphonic Orchestras. He has led the city orchestras of Oulu, Jyväskylä, Kuopio and Vaasa. He has collaborated with numerous youth orchestras and acted as the artistic director of the VIVO Youth Symphonic Orchestra for three years. He holds worldwide acclaim and has taken to the stage with the Staatsphilharmonie Rheinland-Pfalz, the l’Orchestre National du Capitole de Toulouse, the Copenhagen Philharmonic, the Mexico State Orchestra, the Macao Symphonic Orchestra, the Shanghai Opera, St. Petersburg Symphony Orchestra, the Budapest Symphony Orchestra MÁV, the Debrecen Philharmonic, the Oradea Philharmonic Orchestra, the Târgu-Mureș Philharmonic Orchestra and the Savaria Symphony Orchestra in Szombathely.
Tibor Bogányi is credited with an extraordinarily extensive repertoire ranging from symphonic music to choral pieces and to opera and ballet. He conducted Stravinsky’s Le sacre du printemps, Bizet’s Carmen and Puccini’s Tosca with great acclaim. In the autumn of 2006, he conducted Mozart’s Cosi fan tutte, in 2009, Verdi’s La traviata and in 2010 Mozart’s in the Finnish National Opera. In 2005, he organised and conducted a Bartók-series that presented the complete works of the composer, including the Bluebeard’s Castle, The Miraculous Mandarin and the Concerto. Having earned his degree as a cellist, he was admitted to the conducting class of the prestigious Sibelius Academy under Jorma Panula and Lief Segerstam. Bogányi completed his training as a conductor by conducting the world premiere of Aulis Sallinen’s opera Hobbit in the Finnish National Opera. 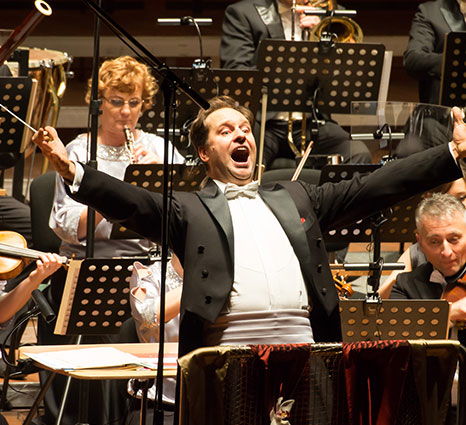 He had the opportunity to study with Janos Fürst in the Conservatoire of Paris, then he received further training from Sir Colin Davis and Yuri Simonov. In 1999, he came second at the International Jorma Panula Conducting Competition. As a cellist, he won the Leó Weiner International Competition in 1996, and then in 1999, as part of a trio, he won the Kuhmo International Chamber Music Competition. Tibor Bogányi is active on stage both as an instrumentalist and as a conductor. As an acknowledgement of his artistic achievements as the ambassador of Finnish culture, in December, 2015, he was decorated with a First Class Knighthood, of the Order of the Lion of Finland. In 2017, as the recognition of his accomplishments as a conductor and a violoncellist, he was presented with the Golden Cross of the Hungarian Order of Merit. Since the season of 2018/2019, Tibor Bogányi has also been active as the chief conductor of the Pori Sinfonietta, the symphony orchestra of the town of Pori in Finland.