Dear Audience! Please note that the program for this concert is changed! Thank you for understanding!

It is with baby steps that the orchestra and its audience can first meet in person. The spring has finally arrived, and perhaps there is burgeoning hope that we will be able to travel not so long from now. At this concert, thanks to the Pannon Philharmonic, we will, however, certainly travel to Argentina with Alberto Ginastera, whose Variaciones concertantes put various instruments in the limelight. At the same time, we can also observe how an Argentinian composer with Catalonian-Italian roots sees the European classical composition techniques. As a concerto, we can relish a newly-revived composition: Haydn's deservedly famous Cello Concerto in C major, which had been believed to be lost until it was discovered in Prague in 1961. Our travel guide to Italy will be Mendelssohn, who reflected on his memories collected in Italy through his Italian Symphony imbued with sparklingly cheerful yet highly emotion-charged moments.

The Argentinian composer Alberto Ginastera (1916-1983) was born to Catalonian and Italian parents. As a student, he spent a considerable amount of time in the United States and then moved back to Argentina, where he was tutored - among others - by Astor Piazzolla. Because of the continuous political tensions, he returned to the US, and finally emigrated to Europe. He spent the final phase of his life in Switzerland. In most of his career, his music was profoundly imbued with his South-American identity and the goal to take the national music of Argentina to higher spheres. Simultaneously, he also strove to pass on and integrate the classical traditions in his music.

The Variaciones Concertantes is one of the most significant pieces in his second period, which musicologists labelled as "subjective nationalism". The basic theme and the key structure of the composition correspond to the tuning of guitar strings. The musical universe of South America emerges in it in several ways, but not through direct quotes, much rather through the subjective view of the composer. At the same time, he expands the constraints of the form of variation in this piece; in fact, he brings it into unity with the concerto genre. The variations focus on various characters and structures but with a broader scope than classical variations do. This diversity is reinforced by the fact that each variation concentrates on a different instrument, which will result in the variations turning into mini concerto movements. In this sense, the term 'variation' does not only refer to the initial theme, but also the concerto, as the same theme presents itself through various instruments, not only through different characters. Two interludes also feature in the work: one scored for strings and the other for wind instruments. In the final movement, the entire orchestra takes to the stage and plays an Argentinian folk dance, the mambo. The dancey character is escalated by the rondo form and some jazz-like elements. Also, the orchestral tutti makes us feel that beyond their solo parts, now all instruments can join in a frolic.

Joseph Haydn (1732-1809) entered the service of the Family Esterházy in 1761 and spent 29 years first in Eisenstadt then in Eszterháza following his admission. The small but extraordinarily high-quality ensemble and his music-loving employer provided Haydn with plenty of space to try himself in various ways. It is no exaggeration to say that without the Court of the Esterházys, the Classical Period would be much poorer. Although the cello had been a permanent member of the orchestra since the Baroque Era, and Baroque composers had penned numerous soloistic pieces for the cello, Classical masters rarely used it in their concertos as a solo instrument. Accordingly, Haydn's Cello Concerto in D major was considered the only substantial cello concerto of its time. Haydn, however, made a comment in his catalogue, referring to another cello concerto completed in the first half of the 1760s, which he dedicated to the cellist of the Hofkapelle of the Esterházy Court, Joseph Franz Weigl. For a long time, though, only the initial theme quoted by Haydn himself was known, as it was regarded as lost for nearly two hundred years. The manuscript was discovered in Prague in 1961, and the modern premiere of the piece was held in 1962, in the Prague Spring. It became a pivotal composition of the cello repertoire in just a few years' time, and its popularity matched that of Haydn's other cello concerto in D major. (It is worth mentioning that Haydn's catalogue of works also alluded to a double bass concerto, and as far as we are aware, that work is also lost. Who knows what is ahead: it might re-appear in our lifetime...)

Even though the Cello Concerto in C major is a relatively early piece in the series of Classical concertos, it does showcase the special features of the era. It has three closed movements: all three written in sonata form. The first one is solemn in nature, the second one is profound and intimate, while the third is playful. Compared to the later composed Cello Concerto in D major, its timbre, intonation clearly show traces of Baroque concertos. It also demonstrates that Haydn, with his roots in the Baroque, created a new school with his compositions.  Besides the typical features of the period, we must also point out the extraordinary virtuosity of the solo part. The fact that a concerto written for a  - back then mostly - continuo-instrument uses the high registers of the cello and builds upon conspicuous register contrasts reveals a lot about Weigl's virtuosity and the high standard of the Esterházy Hofkapelle.

Felix Mendelssohn-Bartholdy (1809-1847) was endowed by his family with plenty both in material wealth and in training opportunities to make the most of his talent, and he did his very best to acquire all the nitty-gritty of his profession. For instance, he composed 12 string symphonies before completing a symphony for a full orchestra. It is the sad irony of life that this brilliant, highly trained and wonderfully hard-working man lived for just 38 years.

Between 1829 and 1831, he went on a grand-scale European tour, which left significant impressions on his works. In 1833, he was invited to England by the London Philharmonic, and he dedicated his Italian Symphony - inspired by his experiences made in Italy - to this occasion. The work garnered great success, but Mendelssohn was never perfectly contented, so he undertook several changes after the premiere.

After the first movement, we can be assured that Mendelssohn had a great time in Italy. This sunny music in A major reflect eternal movement, excitement and curiosity, but it seems that no thrill is enough; in the main theme, there is some fiery and straining impatience to do more. Most composers would have finished their symphony with this movement, but Mendelssohn begins his with it and poses the question: is there a way to heighten exhilaration even more?  The answer is quite stunning, however: he decided not to escalate it. The second movement in D minor is contemplative and melancholy; its anthem-like melody is solemn and expresses longing. There is nothing left in it from the bustle of the previous movement. We would expect a dance or a scherzo as a third movement, yet we get moderate music based on an ambitious theme, with some slight traces of homesickness in it.  The dance movement, a swift saltarello, closes the composition, yet A minor now replaces the initial A major key. Despite its dynamism, this key determines its wild, heroic, even somewhat tragic character. We could hope that toward the end of the movement, the sun comes out again, but it does not: the symphony ends in A minor, and we must accept that the frolicking of the first movement is left behind for good.

Ditta Rohmann is known for her enormous versatility as a musician. She appears as a soloist in various concert halls, improvises with world-music ensembles, and plays a major role in collaborations with dancers, both as a chamber musician and most recently as an actress. 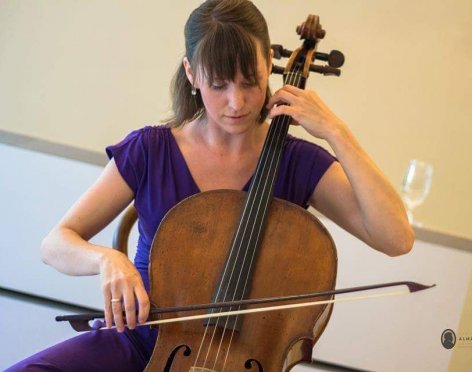