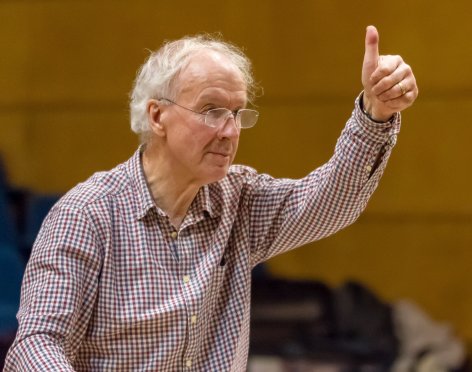 Owing to his accomplishments in opera houses and concert halls, Howard Williams can boast an enviable reputation.  He has conducted nearly all significant orchestras in the UK and has collaborated in several widely-acclaimed world premieres. His personal relationship with Hungary was established in 1989, when he was appointed to be the principal conductor and artistic director of the Pécs Symphony Orchestra. He was the first British conductor to take on such a post in Hungary.

Howard Williams was granted the honorary membership of the orchestra in 2013.

At this concert, all will revolve around freshness, joy and new beginnings. Prokofiev's Symphony No. 1 (“Classical”) pays tribute to Haydn and Mozart’s buoyant symphonies, yet the ever-lively music of its brilliantly swift fast movements surpass the constraints of the Classical Period. His Violin Concerto in G minor was completed nearly two decades later, when Prokofiev recovered from his creative crisis thanks to the decision to write melodic, audience-friendly yet out of the ordinary music. A significant imprint of this decision is this work, whose scoring and orchestration evoke Beethoven in many ways, while its percussion-heavy last movement alludes to folk dances. In John Adams's Foxtrot for Orchestra, ostinati play the central role; the perpetually moving piece calms down only in the lyrical middle section, which is again followed by cheery playfulness. Finally, we can relish a genuine spring composition, which was originally written as a chamber music and ballet piece, but it was then almost immediately re-arranged also as an orchestral suite. According to its plot, a young couple is building a house for themselves in the wilderness. With the reawakening spring, their lives also come into bloom.

Howard Williams’s work in opera houses and concert halls has earned him an enviable reputation. He has conducted almost all of Great Britain’s noteworthy orchestras, including: London Philharmonic, Royal Philharmonic, BBC Symphony, Royal Liverpool Philharmonic, Royal Scottish National, Bournemouth Symphony, English Chamber Orchestra, and the London Sinfonietta orchestras. He has conducted the BBC Proms, and at Edinburgh, Leeds, Bath and Brighton festivals. He is a frequent guest of Holland, Belgium and France’s leading symphonic orchestras, and he also works in Austria, Sweden, Hong Kong and Rio de Janeiro. Haydn’s symphonies, Stravinsky, Bartok and Messiaen’s works and oratories stand out from his concert hall repertoire of over 500 works. Williams’s influential opera repertoire was founded during the six years he worked at the English National Opera, and since then it has only grown, encompassing around 60 works from Monteverdi to Birtwistle. In the focal point of his repertoire are works by Rossini, Verdi and Puccini, but he is also at home with Baroque orchestras as well as new pieces.

Included amongst his many world premiers are the Tippet the Knot Garden’s small orchestral arrangement variation with an original ending, Bizet grand opera and Ivan IV. He conducted the English Bach Festival orchestra in Covent Garden during their performance of Monteverdi’s L’Orfeo, Purcell’s The Fairy Queen and Dido and Aeneas works. His theatrical work includes Tchaikovsky’s and Stravinsky’s main ballets and numerous programs with the Royal Ballet in Covent Garden, as well as with the Holland National Ballet, Holland Dance Theatre, and the Hamburg Ballet.

His direct relationship with Hungary began in 1989, when he was named principal conductor and artistic director of the Pécs Symphonic Orchestra, the first English conductor to accept a Hungarian invitation. He held this role until 1993, and again from January 1, 1997. While he maintained a continuous and close relationship with the Hungarian State Concert Orchestra and the Hungarian State Chorus, his work with the Pécs Symphonic Orchestra led the ensemble to come to the forefront. He crafted a wide and daring repertoire, from the Stravinsky and Mahler cycle to numerous meaningful national premiers (including Ligeti and Berio’s works). In addition to deepening the understanding of Bartok’s work, he is also proactive in performing the works of contemporary Hungarian composers (eg. Balassa, Kalmár and the one-time Young Composer’s Group). Together with the Pécs Symphonic Orchestra they recorded Rachmaninov’s works on CD (Hungaroton), as well as the 18th-19th century Pécs composer György Lickl’s Requiem and Missa Solemnis in F (Koch Schwann, München) and Miklós Rózsa and Gerard Schurmann’s cello concertos (Silvaclassics, London). He has recorded several albums with British and Dutch orchestras. For his work in Hungary, he was awarded with a Pro Civitate honor by Pécs in 1993 and recognised by the Royalty Licensing Office for his work with new Hungarian music.

In 2000 he became the principal conductor of the Royal Welsh College of Music and Theatre in Cardiff, and in the year following he was named artistic director of the Oxford Da Camera Orchestra’s new, London-headquartered 21st Century Choir. In November 2005, he conducted Beethoven’s Leonora opera in the Queen Elizabeth Hall with great success, at the occasion of the opera’s 200th anniversary. In 2013, the Pannon Philharmonic accepted Howard Williams as an eternal member of the orchestra.