Dear Audience, Thanks to an offer from Müpa, our concert, originally announced for 11 December, will be broadcast live from Budapest for free entrance on the webpage of Müpa: https://www.mupa.hu/media/mupa-home and on YouTube channel: https://www.youtube.com/mupabudapest The caption ‘Müpa Live’ will appear on the website at 7.30 p.m. on 11 December. Click on the link to have access to the stream. The concert starts followed by the opening credits, the programme guide and a short announcement.

ONLINE STREAM
Save to calendar
1/2

Our orchestra is nearly 210 years old, and the genre of their repertoire is represented by composers like Ludwig van Beethoven born 250 years ago. The evocation of these numbers is no coincidence. The resident orchestra of the Kodály Centre, which itself turned 10 years old in December, sends the following message to Müpa’s audience: mankind has experienced numerous cataclysms in the past centuries, but symphony orchestras were active even during the darkest of times.

9th December. A momentous date in the music life of Pécs. First, it was on this day in 1811 when the city orchestra - today's Pannon Philharmonic - gave their very first concert. The orchestra considers this date their birthday and seeks to celebrate this event with first-rate concerts. They did just that also 10 years ago, when the orchestra's birthday coincided with the first concert ever held in Kodály Centre. It was a sort of dress rehearsal before the grand opening when the building itself was in the limelight. The orchestra's birthday has again returned just like the 10th anniversary of the inauguration of Kodály Centre, only this time, the audience may not enter, and limited number of musicians can take to the stage. Thus, this feast will be unique due to the intimacy and reservedness we will honour it with. What will the orchestra give the audience as a lasting memory this time? Beethoven's The Consecration of the House overture, which was originally dedicated to a building and many a concert hall has marked their opening galas or their anniversaries with this overture. Its splendour might evoke in many of us the memory of our first settling in Kodály Centre. Beethoven’s Piano Concerto in E-flat major is majesty incorporated, which will clothe our hearts and minds with beauty even online, just as it did 10 years ago, with Dezső Ránki at the piano, like on this 9th December. Finally, the audience can enjoy Schumann’s Symphony No 2, which the composer wrote as a kind of remedy while convalescing from his first severe depression. The principal idea behind the symphony is the will to live, and what else could be a more timely message on such a double jubilee?

The double Kossuth Prize- and Liszt Prize-winning pianist Dezső Ránki interprets Beethoven’s grandiose „Emperor” Piano Concerto, which allows the soloist to perform an extraordinarily majestic and emotional solo part. The concerto’s by-name „Emperor” stands for the royal presence of the piano within the orchestra. Beethoven’s Piano Concert No. 5 in E-flat major is one of the largest scales concertos of its era. This time it is conducted by Tibor Bogányi.

As Dezső Ránki recalled in the interview made with Librarius in connection with his concert in Müpa: „I played this piece for the first time when I was twenty. Since then more than sixty times, but it gives me the same uplifting sensation on each occasion.”

It was Dezső Ránki who took to the stage on the opening concert 10 years ago, thus his person connects the elated and sublime climate of the two concerts.

It’s been ten years since Kodály Centre in Pécs opened its doors to the audience, which greatly enriched not only the city of Pécs itself but the entire country with an emblematic concert hall. What would be a more deserving opening for a reminiscence concert if not Beethoven’s glamorous Consecration of the House overture, which was originally written for the opening of a theatre?

„THERE IS NO NEED FOR MAGIC. WHAT’S NEEDED IS DEZSŐ RÁNKI’S CALIBRE, […] WHO ESTABLISHES OR RATHER SHOWCASES THE LOGIC, UNITY OF THE PIECE WITHOUT ANY KIND OF WIZARDRY. HE DOESN’T ONLY PLAY BUT JUSTIFIES EVERY SINGLE NOTE. EVERYTHING SEEMS COMPLETELY SIMPLE AND NATURAL, AS IF ANY OF US COULD PLAY IT LIKE THIS, IF WE HAD THE RIGHT SKILLS. AND PERHAPS IT’S TRUE. IT’S ONLY THAT NOT ALL OF US HAVE THE RIGHT SKILLS, NEARLY NONE OF US HAS.” (MIKLÓS FÁY) 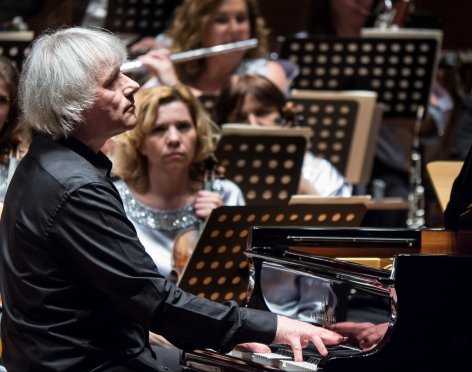