Ticket prices: Admission to the concert is free of charge, but registration tickets are required. Registration tickets can be requested in person in the ticket office of the Kodály Centre, by phone at +36 72 500 300 or by email at haasz.zsofia@pfz.hu as far as the standing capacity of the hall allows.

By the organisers' plans, this year's European Convivial Winesong Festival can be a real community feast celebrated in a pleasant atmosphere. It is beautiful to be together again in the concert hall and enjoy the music! The energetic song of the choirs captivate all of us; in fact, we feel like singing along with them. According to the programme, the first part of the concert will feature choral pieces performed by the Zengő Ensemble, the Vivat Bacchus Vocal Ensemble, the Béla Bartók Male Choir, the Male Choir of the MÁV-GÉPÉSZET Repair Works as well as the Pécs University Choir.  In the second part, the Pannon Philharmonic will enchant the audience with the Carmina Burana.

Carl Orff's Carmina Burana essentially turned its composer into a one-hit-wonder, as its popularity far exceeds that of Orff's oeuvre. Yet, even if nearly everyone knows the first movement, the entire scenic cantata, or profane oratorio, is staged only rarely in its unabridged, four-movement version. The poems written in various archaic dialects can be put in four thematic groups: In Spring, In the Meadow, In the Tavern and Court of Love. The music is occasionally also coupled with drama and dance. Its language is Latin, Middle German and Middle French. Its tone has a folk – indeed, archaic – character evoking tribal music, yet it is grand-scale and modern, which can best be traced in the importance of the symphony orchestra and the percussion section. The music reflects the two faces of Medieval profane poetry: the millennia-old universe related to Gregorian chants and, at the same time, its musical and textual parody, which was already present at its own time.

The event was jointly organised by the Pécs Male Choir Foundation and the Pannon Philharmonic. 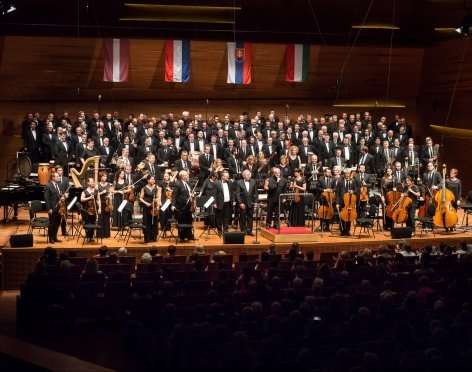