Ticket prices: Admission to the concert is free of charge but requires registration. Registration tickets can be received in person at the ticket office of Kodály Centre from 24 August 10AM.
Ticket purchase

Gala Concert on the Feast Day of Pécs

Admission to the concert is free of charge but requires registration. Registration tickets can be received in person at the ticket office of Kodály Centre from 24 August 10AM.

The month of September traditionally begins with a gala concert on the Feast Day of Pécs. All residents and visitors of Pécs are most welcome to attend.

Feast Day of Pécs City is celebrated by the Pannon Philharmonic Orchestra with a  traditional gala concert. This year, however, the gala concert also marks the first indoors symphonic concert held in Kodály Centre after the long pandemic-imposed break. The night’s programme features works written by three composers whose names all start with the letter “B”: Bach, Bartók and Beethoven. Not only the composers themselves but also these specific compositions belong the audience’s favourites. Bach’s Suite in D major is best known for its lyrical “Air”, so much so that it is one of the most popular classical compositions. The suite, though, is rarely performed in full length. In his Two Portraits, Bartók pays tribute to the love of his early years. Only one movement from it is featured this night, though: the optimal one, the “Ideal One”.  From Beethoven’s symphonies, it is Symphony No. 5 “Destiny” that best suits this year’s gala concert, as it proclaims the invincibility of fate ruthlessly knocking on our doors while giving us hope for a splendid future.

The symphonic concert under the baton of PFZ’s permanent conductor, András Vass features some emblematic compositions by Bach, Bartók and Beethoven.

The night begins with Johann Sebastian Bach’s Suite No. 3 in D major, which is famous for its intimate and emotional 2nd movement ,“Air” (aria). This movement has taken on a life of its own and occupies a place even in the minds of those who are not particularly familiar with classical music. Bach’s orchestral suites can rarely be heard in full length, even though the splendour and ingenuity of these works do not lag behind the composer’s instrumental pieces. The soloist of in the 1st movement of Béla Bartók’s concerto Two Portraits titled  by its author “One Ideal” is the concertmaster of the Pannon Philharmonic, violinist Zoltán Bánfalvi. The concerto is a reminiscent of the young Bartók’s romantic feelings and requires virtuosity and expert performance. Bánfalvi is a musician with master’s and doctoral degrees, he has toured extensively the concert halls of Europe, Asia and America.  He was elected Musician of the Year in 2015/2016 and has also has considerable accomplishments  in composition and re-arrangemet.

The evening’s programme is closed with Ludwig van Beethoven’s iconic Symphony No. 5 “Destiny” conducted with great profundity and consciousness by András Vass.

András Vass, the conductor’s thoughts on the composition:

„Beethoven’s Symphony No. 5 is one of the best-known and most popular classical music compositions. Posthumously, it was given the label »Destiny«, although neither the composer himself, nor the contemporary reviews mentioned this by-name and or connect Beethoven’s work with the subject of destiny in any way. In his analysis written a year and a half after the symphony was published, Beethoven’s contemporary, Ernst Theodor Amadeus Hoffmann, interpreted it as a cosmic battle, which takes us from the state of fear, darkness and oppression to the world of courage, light and freedom. The tonal structure of the symphony supports this interpretation: it starts in C minor, a key typical of tragic compositions in Beethoven’s time but also -as it was widely considered - the key of death, while in the last movement we arrive in C major, the key of life, freedom and light. The sub-theme played by the French horns in the 1st movement mirrors the initial notes of La Marseillaise with a contrary direction of movement. Beethoven makes his thoughts even more explicit: in the last movement, he writes »la liberté« (the liberty) over one of his melodies. 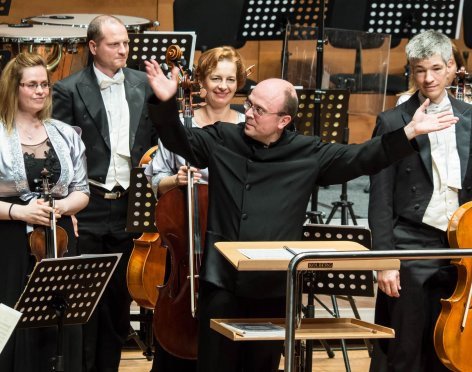