ONLINE STREAM
Save to calendar
1/3

Around this time, in December, our musical change undergoes some kind of change: grandiose, Romantic or contemporary mainstream compositions are replaced by heart-warming, traditional Christmas songs or the desire to listen to lightly curling Baroque melodies. This Christmas concert will bring you the purest joy of Baroque music. In the first part, the audience can enjoy three fanfare-like triumphal marches by Marc-Antoine Charpentier, two of which are rarely staged, but the prelude of his Te Deum is likely to ring a bell with even those listeners, who have never heard Charpentier’s name. Following the marches, the grand master of Baroque concertos, Corelli, will be evoked through his Christmas Concerto, which will precede the tunes of Vivaldi, the other magnificent composer of concertos. This time, however, a solo motet of his will be heard, as no Christmas programme can be considered complete without the human voice. Two of Telemann's compositions conclude the concert: first a brightly tuned orchestral piece, his Ouverture-Suite in B-flat major, and finally, as the crowning of the night’s timbre, his Concerto in D major, scored for the solo of three trumpets and timpani.  At this absolutely unique Christmas concert, the choir of angels will sing to us in a solo voice and the instruments of the orchestra. 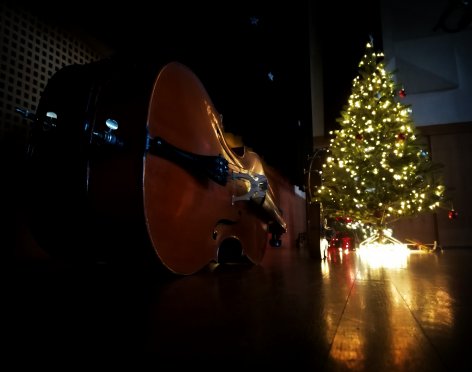 Although tonight's concert begins with three marches from two different works, only the first of these are actually titled a "march".  This unique piece by French Baroque composer, Marc-Antoine Charpentier (1643-1704) will feature as first on our programme. The two movements of the orchestral composition bear the following titles: I. Marche de Triomphe (Triumphal March)  – II. Second air de Trompette (Second aria for trumpet). We must wonder, however, "second" compared to what? Especially, if it is actually just another triumphal march for trumpets… In essence, therefore, we are talking about two marches, in particular, because both of them are scored virtually all the way through for five parts, which are sometimes played by several instruments. For instance, the highest part is played by the first violin, the trumpets, the flutes and the oboes.

Both marches are written in rondo form; thus the episodes played by smaller instrumental groups come in between the recurring rondo theme. In the 2nd movement, the instruments are not overpowered by the trumpet, so the original title 'air de trompette' mainly refers to its character and its boisterousness.

After the two very special but sadly obliterated marches, we can enjoy a real classical music hit. In essence, it is also a march but is titled as the Prelude to Charpentier’s Te Deum. In other words, it is the instrumental introdcution to a vocal composition. Even though the Te Deum itself is staged rarely, its Prelude often accompanies festive occasions and has been re-arranged several times since it was first composed.

The Baroque violinist, Arcangelo Corelli (1653-1713) is best known for his instrumental pieces, more specifically, his concertos. His Christmas Concerto is a singularly set up concerto grosso (a genre whose most significant pioneer was Corelli himself) scored for two apparatuses. The soloists' group consists of two violins and a cello, while the ensemble constitutes of strings and continuo. Similarly to Corelli's other concertos, the Christmas Concerto is not structured in three movements (as most Baroque concertos conceived later) but in a suite-like setup with several short movements of multiple tempi and various characters, typical of Baroque trio sonatas. Albeit the concerto is traditionally no Church music genre, the master added the inscription below the title: "Fatto per la notte di natale" or "Made for the night of Christmas". In Corelli's time, the Church sonata was a popular genre, which differed from the Sonata fa Camera ("chamber sonata") insofar as it featured more slow and solemn movements. Thus, it is quite clear how Corelli came to compose a concerto for Christmas having been familiar with sonata-like concertos. But how is this piece connected to Christmas?  The first part is not particularly Christmassy; it is basically a concerto grosso that could be performed on any occasion. The Christmassy nature of the piece is carried by the 2nd movement, which - as its title suggests- is optional. Yet, its slow, intimate pastoral character evokes the atmosphere surrounding the Baby Jesus born in a manger, lending the work a Christmassy ambience. The composition sets off in the "everyday world" of concertos, which is suddenly interrupted by an intimate scene. The sparkling G minor is succeeded by a peaceful, contemplative movement in G major, which also concludes the concerto. It seems anything is possible, so even a concerto can be closed with a quiet, slow movement.

Antonio Vivaldi (1678-1741) is primarily acclaimed for his concertos, though he also composed numerous vocal pieces, such as operas and cantatas. The motet featured tonight is basically a brief solo cantata, which contrasts human iniquity with God's love. "Nulla in mundo pax sincera, sine felle, pura et vera, dulcis Jesu, est in te", in English: "In this world there is no honest peace free from bitterness; pure and true (i.e. peace) sweet Jesus, lies in Thee."  are the initial lines of the first aria, and this notion is also developed by the movements to follow. The music has no lamenting, penitent or gloomy nature. The joyful and hopeful character of the E major and A major keys, the graceful melodic phrases, generous sequences focus mainly on the second part of the above sentence: heavenly peace, harmony and purity.

Georg Philipp Telemann (1681-1767) was perhaps the most prolific composer of the Baroque period: he wrote more than Bach and Handel together. In fact, his oeuvre contains more than one Overture-Suites in B-flat major. The piece performed today is a less well-known but more lengthy one of these. The traditional structure of overture-suites is as follows: they begin with a Baroque opera overture with a slow introduction, quick-paced imitation section and then eventually, with a slow coda. This is succeeded by a number of short - mostly dance - movements of various characters. This precursor of the divertimento was played by various instrumental setups, so basically each work is performed by a different apparatus. The piece featured tonight is one the larger-scale suites, not only in length but also with regards to its instrumental setup: the strings are complemented with three oboes, a bassoon and continuo. Telemann frequently used the ensemble similarly to a double choir (wind and string instruments). In other words, instead of independent parts imitating each other, the principle of contrasting blocks prevails. The movements carry very diverse characters; most of them are fast, yet we can also hear some more intimate and graceful episodes among them.

If splendour, then D major. If splendour and D major, then trumpets. If trumpets, then also a timpani. This was roughly the stream of thought Baroque masters followed. But the icing on the cake is that all these features unite in a concerto, where there are three solo trumpets, their permanent company, the timpani, crowned with the accompaniment of an orchestra. This Baroque opulence is laid before us tonight in Telemann's concerto. Modelled on overture-suites, the concerto is endowed with an overture, which introduces the timbre with the glamour typical of French overtures. It is followed by the usual movement pattern: fast-slow-fast. A further curiosity of the piece is that in the middle movement, neither the trumpets nor the timpani makes themselves heard, but the strings come to accompany a tune developed by the oboe. The fast movements of the composition evoke the impression of fireworks, so even if this year's winter holidays are different, we will certainly have the chance to hear fireworks in an artistic form.